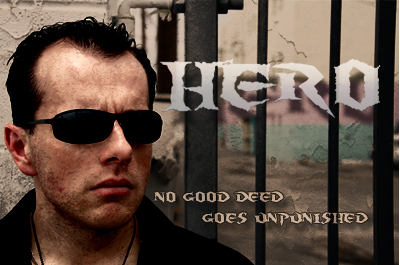 Hero is a new film by Terminal C L E currently in production. Hero is written by Tim Santoro, who stars in the film, along with co-stars Maureen E. Durocher, Martin Douglas, and several other up and coming talents. Besides being in front of the camera, several of actors will be helping out behind the scenes.

Maureen E. Durocher will be lending her considerable acting talents, along with her skills in makeup and makeup FX to the film. Martin Douglas will also be helping out with graphic design, and video editing/FX when not working in front of the camera. Tim Santoro, having written the original script, will be pulling double duty directing the actors between his own scenes within the movie. This Indie film is expected to wrap towards the end of the summer, with submissions into several film festivals starting by the fall. More info will be shared as it becomes available. You can also check out Terminal C L E on their website at TerminalCLE.com