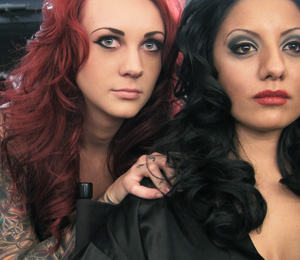 A few years back I was able to shoot a video. I had written the script based on the theme for the video and we had scheduled three days for shooting. For the most part, everything went well. The actors, who weren’t trained, and the hair and makeup people, who were included in the video, did an amazing job. In many cases they did a far better job than the ‘trained’ actors I’ve met. During shooting, the only issue we ran into was a no-show on the final day which we weren’t able to complete. Obviously this meant the plan to edit it in a certain way had to be changed, including having a storyline, which was disappointing.

Even then, the footage we had when played back looked good on camera. It was completely salvageable, even if it couldn’t be edited the way I had planned. Then the problems came between crashes that erased all edits, getting half way through the rough edit and having the footage being stolen with my laptop, and several other issues that I won’t get into. Needless to say, I benched the project for a few years as I got caught up in writing my books, web design, some photography, and programming.

For the last several months I’ve wanted to shoot a few projects again, but getting people to show up has proven difficult. With anyone who has ever done indy films, there’s always that worry that the final product will look…scary bad or cheap. So it makes sense to at least have some of my work to show something of quality. Besides a few behind the scenes quickies I did, I didn’t really have a lot of footage that I could put up in any fashion that would make sense for what I’d like to do. More importantly, no footage I had was where I had the majority of control, or final say over, during shooting. That’s when I remembered the makeup video shoot.

Digging through it and editing it over the last month or two in my spare time, I learned a few valuable lessons that I thought would be useful for filmmakers just starting off. If only I knew then what I know now! So without further ado, here are the top three things I wish I had known during that first shoot.

For those who don’t know, a WhiBal card helps to get proper white balance. In simple terms, making sure things that are white appear white in the video. While there are a few ways to set white balance in camera, I prefer using a card and adjusting it in post. If you’re using gels for a particular look, it might not be required. Sometimes getting those colors in camera comes across as more intimate in the final product. Even if I was using gels though, I’d still like to get a quick still shot, or even have the card in the video itself at the start, so I always have a safe fall back for proper white balance where I can then readjust color temperature from that base if the shot didn’t come out right.

At the time of the video shoot above, I didn’t have a WhiBal card, and really didn’t think much of white balance. I was also shooting one set of shots with a Nikon and another with a Canon. That made the cuts back and forth easier for continuity, but because the cameras have slightly different colors, along with contrast, etc. that meant a lot more work in post to try to match skin tones and colors. Aggravating to say the least!

If I had used a WhiBal card, it would have been easier just focusing on the contrast differences. Although even better would have been getting the cameras to more closely match, or using the same camera from the start. Either way, having a WhiBal card would have saved me a big headache. If you’re interested in learning more about the WhiBal cards, you can find a more in-depth write-up on another website I run here. You can also see some of the color issues I wasn’t quite able to fix, or didn’t have the patience to, with the colors of the last scene when she walks out with her coat vs the colored scenes beforehand. Thankfully, doing part of it in black and white made some of the scenes a bit easier to blend.

Depth of field is basically what parts of the video or photo are in focus and which are blurred. You’ll see this a lot in movies and photographs when there are closeups and the background is extremely blurry. In photography, it’s usually called the Bokeh effect. Whether they use the same term in film, I have no idea. Personally I love closeups more than anything else, although with video you obviously can’t just shoot in closeups alone to tell a story. Umm, wait…that might be an interesting idea to try!

It’s all fun stuff. While there are basics to it and how to achieve it, I really think it’s a fun thing to play with in telling a story. With that said, there are obviously times it does not work! A prime example is the 31 second mark in my video above. I wanted the focus to be on the makeup artist, but I’m really not digging the shallow depth of field that put the girl, having the makeup applied closer to the camera, out of focus.

It’s not that putting close objects out of focus is a bad idea. You’ll often see that with over the shoulder shots where the back of the person’s head is slightly out of focus, and the one talking to him is in focus. You might even see it when they shift focus from foreground to background. Personally I like that composition when done in that manner. The problem in this shot is that too much of the subject in the foreground is in view, which makes her being out of focus an undesirable effect. If there was one shot I could redo out of that whole video, that would be it. When shooting your film, be careful of how your using the depth of field so you don’t run into that same issue.

This is the one that killed me the most! During our shooting, I was so concerned about making sure the shots we were shooting looked good, that I focused solely on the subject and not on the surroundings. This led to me banging my head against the wall in post production, and wishing there was someway to redo certain parts. It’s an experience I wish upon no one.

The first major issue, and the one that couldn’t be completely corrected unless I brought the person back to redo a line, was the sound. You’ll notice this around the 5 second mark when she asks the girl, “Are you ready?” Her voice sounds hollow, and a bit tinny. Completely different from the sound of her voice during the end of the video. The reason is not because of the mics we used, but because we weren’t paying attention to sounds that were in the background. Throughout the majority of the shoot, we had music playing in the background in the beauty salon we were shooting at.

When I got to post and starting cutting the video, the background music was extremely obvious when she said her line. Besides the fact that this would cause some copyright issues having that playing in the background, it also almost drowned out her line, and didn’t jive well with the music I had placed over the video. This meant going into some sound editing software and taking it out. Removing that sound from the background resulted in that weird, tinny sound in her voice.

I’m not really a sound guy, but even spending several days trying different things and going through tutorials from professionals, I found it was almost impossible to fix. I could take the music out in the background, but couldn’t fix the tinny voice after it was removed. The opinion of the professionals in that situation was that those circumstances were basically unfixable. Small things like low hums might be able to be edited nicely, but with sound like we had it’s basically either reshoot or do the best you can and hope for the best. Although the best situation is to really pay attention to any noise and fix it before shooting. Trust me when I say you’ll save yourself a headache!

This leads us to clutter. This isn’t really a complicated fix, at least not like the sound, but it’s time-consuming nonetheless. Here’s what the background looked like before it was edited in the video. 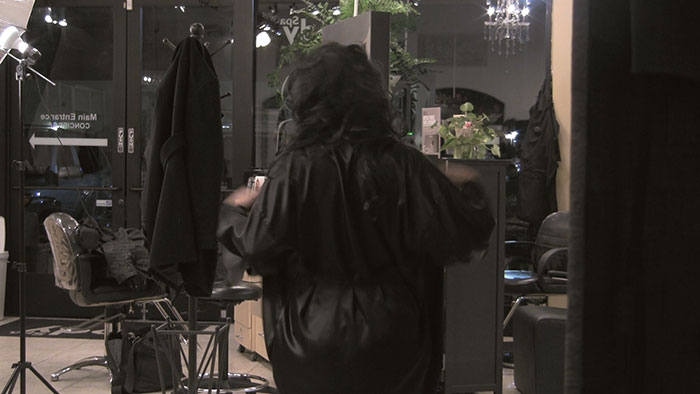 If you compare this to the 17 second mark in the video, you’ll noticed how the chairs, light stand, window lettering, and the camera bag were edited out. I probably would have taken some of that stuff out anyway, such as the window lettering, which could not be removed during filming. The rest of the stuff could have been moved out of frame before even shooting though. By not paying attention to it, I had extra work to do in post with cloning it out in Photoshop and then masking the new background back into the video.

So that’s it. Three things I wish I had known back then during that first film shoot. They’re things that are easy to overlook when you’re focused on the subjects your shooting, but can also destroy a shot when you finally notice them later on. As a final thought, I would like to give a huge thanks to Alan Brooks who helped out with shooting the video. He’s done some great work in the past and helped make me feel extremely comfortable during my first shoot without trying to take control of it and instead helping me create what I saw. I can’t thank him enough for his advice and guidance. If you get a chance, check out his film Rose. I’m not sure if it’s still up on Amazon, but it was one of his first feature length films he shot himself, or at least I think it was. Plus he’s got a great take on the Batman’s Joker in one of the shorts he shot, which last time I saw was up on YouTube or Facebook. And finally, a huge thanks to all the talent that participated. As I said, they did an amazing job and were great to work with. I’d love to work with them again sometime in the future.